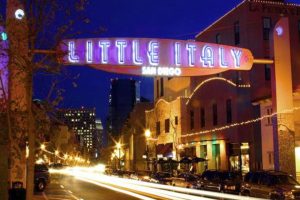 It’s always interesting to dive into the cultural history of a particular ethnic neighborhood. San Diego’s Little Italy began life as a fishing town, which was almost exclusively occupied by Italian immigrants. Today, it has been massively gentrified and has become a beautiful little community that caters to high fashion. It was once a far cry from what it is today, a more industrial space that provided much of the infrastructure for America’s tuna industry.

The workers who lived in Little Italy produced the boats that San Diego’s tuna industry area. Their work building ships gave way to canning and packaging jobs that brought new opportunity to San Diego. It’s hard to believe now, but San Diego was once called the tuna capital of the West. At peak production, the industry was easily 1,000 workers strong.

Inflation crept in and slowly ate away at profits, jobs and the industry itself. Little Italy maintained a small fishing fleet that serviced the area, supported by the few remaining canaries, but production was moved to more business-friendly regions. The fleet still remains, however, staffed by immigrants from Portugal and Italy.

Little Italy didn’t die with the tuna industry, it saw an influx of people with the 1906 earthquake that devastated San Francisco. Some fled to the area to escape the devastation. Eventually, the community was bisected by an interstate freeway that divided the region and took away some of its communal charm. Residents still commemorate the roots of that space with a sculpture dedicated to the tuna industry that helped to build San Diego’s Little Italy.